The Institutions of Extraterrestrial Liberty

Information on the meeting

A four-day series of seminars hosted by the University of Edinburgh (Edinburgh Futures Institute and UK Centre for Astrobiology) with the British Interplanetary Society (UK), the Open Lunar Foundation (US) and the Institute for Liberal Studies (Canada) exploring the conditions for freedom beyond Earth.

Register for the meeting here: https://www.eventbrite.co.uk/e/the-institutions-of-extraterrestrial-liberty-tickets-137611394385You can download the provisional meeting schedule and talks here: 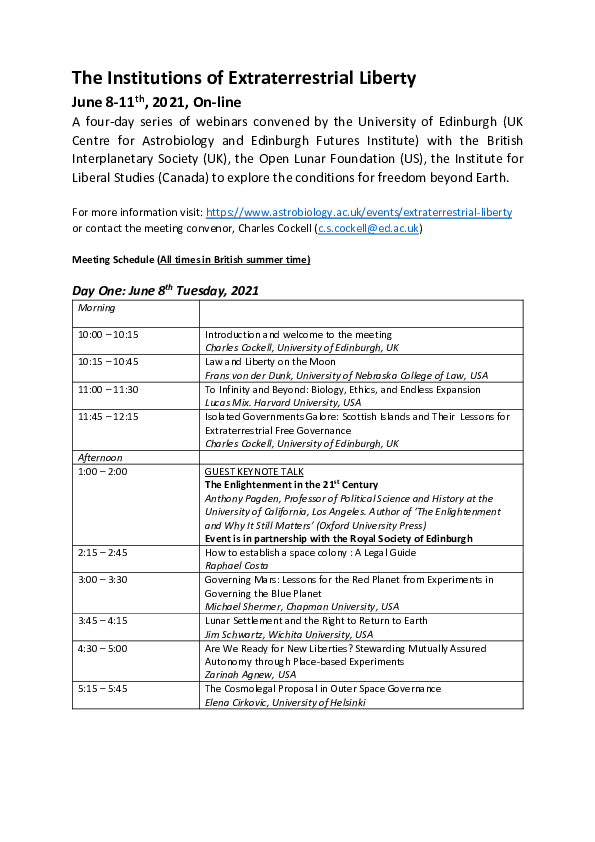 This meeting will be recorded for those who can't make the UK times! The meeting convenor is Charles Cockell (c.s.cockell@ed.ac.uk)

The establishment of a permanent human presence beyond the Earth raises questions on what freedoms people can expect. On the one hand, space offers escape from entrenched views on Earth. On the other hand, the control of oxygen, food, and water production in isolated populations presents opportunities for extensive forms of tyranny. Investigating the institutional arrangements for liberty in space constitutes a fascinating problem in political philosophy and one of the most profound new challenges for democracy in the 21st century.

This four-day on-line webinar series will consider the question: How will institutional arrangements shape the nature of liberty beyond Earth? Over 20 speakers will present their ideas on the Institutions of Extraterrestrial Liberty.

The meeting includes two Keynote lectures (8th and 9th June) on 'The Case for Space is Liberty' by Robert Zubrin, President of the Mars Society and author of 'The Case for Mars' and  'The Enlightenment in the 21st century' by Anthony Pagden, Professor of Political Science and History at the University of California, Los Angeles and author of 'The Enlightenment and Why It Still Matters'. This lecture is in partnership with the Royal Society of Edinburgh.

The discussion meeting runs parallel to the assembly of a multi-author volume: ‘The Institutions of Extraterrestrial Liberty’, which will be published by Oxford University Press (OUP) in 2022.

The discussion will consist of four days of presentations and discussion.

Questions to be addressed at the meeting

Speakers will address a wide variety of topics including, but not limited to, the questions below:

What forms of governance are optimal in space?

What will be the forms of liberty in space and how they will manifest in political and economic institutions?

What will be the conditions for scientific freedom beyond Earth and what should be the form of scientific institutions?

Will traditional institutions designed to mitigate tyranny, such as the rule of law and the separation of powers, work in space?

When is the right time to declare independence in space and can it be achieved at all?

Is revolution against a space authority justified?

... and many other questions