Here you can find the latest news from the UK Centre for Astrobiology.

UKCA co-director and Chancellor’s Fellow, Sean McMahon, has accepted a three-month visiting fellowship at Durham University’s Institute of Advanced Study, a research centre that brings together leading researchers and practitioners from around the world to collaborate on cutting-edge interdisciplinary projects. Sean is participating in the “Antimicrobial Clay Therapy” project led by Durham molecular biologist Gary Sharples and sociologist Kim Jamie. This project aims to combine empirical studies of the chemistry and antibacterial activities of clay minerals with political, social and cultural investigations that may inform future medical applications of these minerals. Other visiting fellows on the project include leading international experts in clay mineral chemistry and activity.

Sean’s work on clay-organic interactions is motivated by their potential roles in the origin of life and the preservation of biomolecules and cells in ancient rocks on Earth and Mars. While in Durham, Sean is conducting biogeochemical experiments to investigate how and why some clay minerals modify the chemical environment around decaying organisms so that organic preservation is favoured. He will return to Edinburgh at the beginning of 2020.

Planetary science and mining technology to be tested in Boulby Mine

In March 2020, the UKCA will host the eighth iteration of its highly successful MINAR (Mining Analogue Research) programme at Boulby Mine. MINAR 8 will involve teams from NASA JPL, Kalam University (India), Newcastle University and other institutions. MINAR 8 will focus on deep subsurface sulfate deposits.

Begun in 2014, MINAR brings planetary scientists together in the Boulby Mine to undertake scientific studies, test technology for planetary exploration and consider synergies with mining applications, using the Boulby Underground Science Facility.

You can read more about the MINAR programme and its past work in the link below: 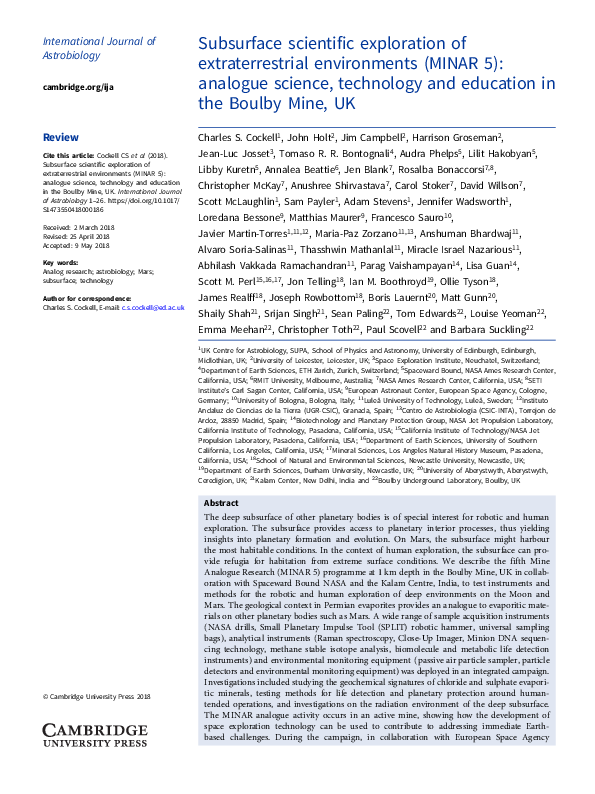 The UKCA's BioRock experiment was successfully sent to the International Space Station in August 2019. The experiment studied how microbes grow, form biofilms and influence the extraction of elements from rocks.

BioRock was launched on SpaceX Commercial Resupply Mission 18 from NASA Kennedy Space Centre in July and returned at the end of August on the SpaceX Dragon capsule. The experiment investigated three microbes and their growth responses to microgravity, simulated Martian gravity and a 1 g control. The team conducted parrallel groudn experiments at NASA Ames Research Centre.

You can read more about this experiment here: https://www.nasa.gov/mission_pages/station/research/news/biorock-iss-research-microbes-space/

BioRock experiment to launch with Space X to ISS

The UKCA's BioRock experiment is a NASA research highlight in the run up to the launch of Space X's Commercial Resupply Mission 18 to the International Space Station.  You can read more about the experiment here: https://www.nasa.gov/mission_pages/station/research/news/spx18-research/

BioRock is an experiment to study the interaction of microbes with rocks and the diverse applications of this research including: Biomining of elements from extraterrestrial materials in future human space exploration and settlement initiatives, the study of soil formation from rocks, the study of the use of extraterrestrial regolith in future space exploration. The experiment will also offer new fundamental insights into biofilm growth in space.

The UKCA will launch an experiment to the International Space Station in July 2019 to test the world's first prototype biomining reactor. BioRock is scheduled for launch on Space X CRS-18 to the station. The experiment consists of 18 biomining reactors containing basalt rocks to simulate lunar and Martian rocks. Once onboard the space station, microbes on the rock are activated and they begin to grow on the rocks and extract economically interesting elements such as rare earth elements. The microbes will be grown in space conditions (microgravity) and simulated Martian and Earth gravity using the space station's KUBIK centrifuges. After three weeks, the experiment is terminated the reactors sent back to Earth on a Space X Dragon capsule. Scientists at UKCA will study microbial growth, extraction of elements from the rocks, and the role of microgravity and Martian gravity in influencing  microbial growth.

In collaboration with the Scottish Prison Service, prisoners design their own lunar stations and publish a book

Following on from its successful first round of Life Beyond, a UKCA project to advance science education in prisoners and encourage prisoners to take an active part in original research, the UKCA has just completed a three month project in HMP Glenochil to design a station for the lunar surface.

Life Beyond has been running since 2016 and has already resulted in a prisoner-led book on Mars station designs in collaboration with the British Interplanetary Society.  This time, prisoners took on the task of designing a station for the Moon (image shown of one of their drawings). As well as scientific designs, the participants wrote poetry, music,  essays and considered the societal issues in establishing long-term settlements beyond the Earth, including governance and civil responsibilities. You can read more about this project and its learning objectives in the Journal of Correctional Education and in the summary paper below.

A book presenting the lunar station designs will be published later in 2019. 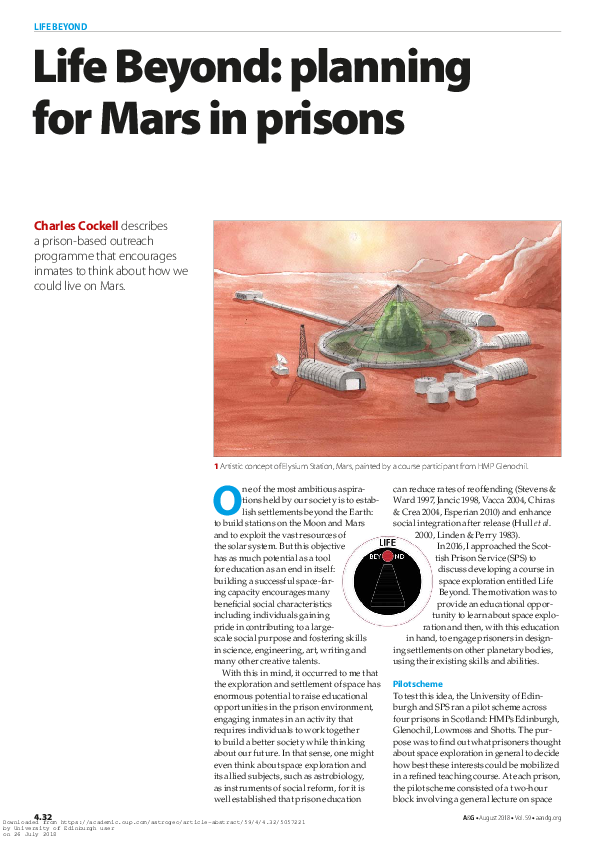 A special issue of papers has been published on the NASA project BASALT. Over a four year period, the UKCA worked as lead on the microbiology effort to study life in extreme basaltic environments in preparation for human missions to Mars. BASALT (Biologic Analog Science Associated with Lava Terrains) research programme was an international team of scientists, engineers, mission operators, and NASA astronauts dedicated to enabling the human-robotic exploration of Mars.

The four year NASA-funded programme explored the lava terrains of Idaho and Hawaii, testing technologies for humn exploration, sampling protocols and carrying out science. The UKCA led the study on the microbiology of the sites to advance sampling protocols and our fundamental understanding of life in extreme rocky environments.

The special issue (Astrobiology March issue) covers some of the major reserach outcomes of the BASALT programme.

Students from India join UKCA in tests of underground robots

The UKCA has led its seventh MINAR (Mine Analogue Research) programme in Boulby Mine, UK in collaboration with the Kalam University, India. Boulby Mine is the location of the world's first  subsurface astrobiology lab, established by UKCA in 2013. In MINAR 7, UKCA and the Boulby Underground Science Facility were joined by six undergraduates from IMS Engineering College, Ghaziabad, India and the Dronacharya Group of institutions.

The students came to Boulby to test two rovers . The rovers are tests for technology for the Indian exploration of the Moon and Mars with possible transfer into mining environments. Over the week, they drove their rovers in the Boulby Mars yard, testing the components for ruggedness and improving ideas for rover design. This was the first field test of their rovers.

The students were selected through the Edinburgh University-Kalam Centre (India) project called 'Mars Mission India'. Mars Mission India is an initiative to advance astrobiology and space exploration education in India which has included developing astrobiology for primary and secondary schools in India and astrobiology engineering at university level, building on expertise developed by the UK Centre for Astrobiology.

The students returned to India to improve their rovers based on their experiences at Boulby and in the future they hope to work on Indian space missions.

MINAR is a UKCA-led initiative, begun in 2013, to link space exploration with the Earth-based challenges of safe and successful mining. It was the first planetary analogue programme to be started in the UK and the first analogue programme to be established in an active mine environment, linking a commercial environment with the development of space technology. You can read a paper on the MINAR programme below:

Mars Mission design and astrobiology takes off through Kalam University

The UKCA has signed an agreement with the Kalam Centre and the Abdul Kalam Technical University to launch an Indian nationwide competition to design technology for Mars. The 'Mars Mission India' will culminate in students visiting Boulby Mine to test their technological innovations. In addition to Mars Mission India, the UKCA and Kalam University are using the MOOC materials from the UKCA to launch an online astrobiology course in India.

Where to search for life on Mars?

Sean McMahon has recently published a paper that proposes the best places to search for evidence of past life on Mars. The paper was written with a host of co-authors from the NASA Astrobiology Institute, and aims to help forthcoming NASA and European missions to search for traces of ancient life on the red planet. Three or four billion years ago, Mars was warm enough to sustain lakes, rivers, and maybe oceans. These water bodies produced sediments rich in iron, silica, and clay — components strongly favourable to the formation of fossils, for reasons that are well understood and experimentally verifiable. On Earth, rocks this old have been scrambled, destroyed and recycled by the movements of tectonic plates and by the erosive action of liquid water. But on Mars, a much drier and less dynamic planet, rocks of this age are well preserved and easy to find in crater-lake and river deposits. Right now, we argue, these rocks are the best place to look for fossils on Mars — better than the other candidates, which include possible hot-spring silica “sinter” in Gusev Crater, rare carbonate minerals, salt deposits, and mineral-filled pores in volcanic rocks (these might be explored one day, but need more work to resolve critical uncertainties and objections).

The UKCA has published a paper summarising the first five years of the centre with a specific focus on lessons we have learned in establishing a centre. The paper is primarily directed at those thinking of doing something similar (or setting up any centre). It discusses how we have integrated science with teaching and public education and our accomplishments in science, technology and space policy.  The paper is open access and you can get access to it by clicking here. Or you can download it below.

After a successful first set of courses at two prisons in Scotland, HMP Glenochil and Edinburgh, a book bringing together the Mars station designs developed by learners at the prisons is to be published jointly with the British Interplanetary Society.  The book - 'Life Beyond - From Prison to Mars' will be distributed to space agencies, engineering organisations and space societies around the world to promote the work at the prisons. It's also to be used as  a 'textbook' for future iterations of the course at other prisons. If you're interested in receiving a copy of the book, please get in contact with us.

You can buy the book here.

The UKCA completed a two week campaign of testing space instruments and studying life in extreme environments using an underground astrobiology laboratory 1 km underground at the Boulby Mine, UK in October 2017.

MINAR 5 (Mine Analog Research) ran from October 8-20th 2017 for two weeks and involved scientists from NASA, Sweden, Switzerland and a number of groups from the UK. It focussed on the study of life and biosignature in the deep subsurface and the testing of a variety of instruments including drills, life detection equipment and other new planetary instruments. In the second week, MINAR involved ESA astronaut Matthias Maurer. You can access conversations on Matthias  here and You Tube also has other links to MINAR.

You can read about the MINAR programme here.

In September 2017 the UKCA was joined by Javier Martin-Torres, who currently leads a planetary science and atmospheric research group at the Luleå University of Technology, Sweden, division of Space technology. Javier is PI of the HABIT instrument to be flown on the ExoMars European Mars lander and will join us as a Visiting Fellow.

The UKCA was joined by by Marie-Curie Fellow, Sean McMahon in September 2017. His work has focused on early life on Earth and its application to looking at the habitability of other planets such as Mars. Previusly at Yale and Aberdeen, at the University of Edinburgh he will work on subsurface biosignatures and how they can inform the search for life elsewhere.